Construction cluster Dundjer from Nis, received a prestigious European award for cluster excellence BRONZE LABEL from the European Secretariat for Cluster Analysis ESCA for the total achieved results in its ten-year work. The prize is awarded for excellence in management and the development of the idea of clustering.

Since the cluster was already benchmarked by the European Cluster Observatory in 2009, by the specialization index of 8.7 it was estimated that this award is only a confirmation that the cluster has managed to maintain high quality all these years and become internationally recognizable.

This is the third, but so far the most significant, award given to Cluster Dundjer.

The first was awarded by the Ministry of Science and Technology for the best technological innovation in the country in 2010.

The second was in 2011 for the use of ICT, allocated by the Ministry of Telecommunications.

The certificate was received by Ms. Biljana Avramovic, general manager of the cluster. 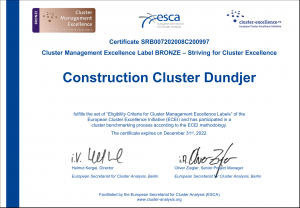